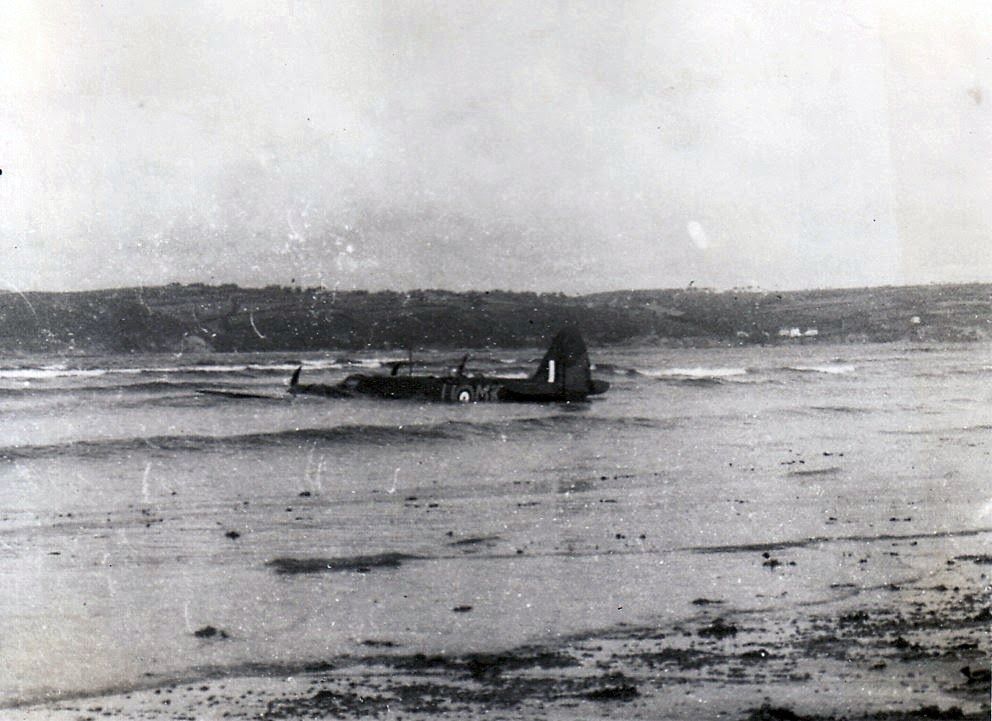 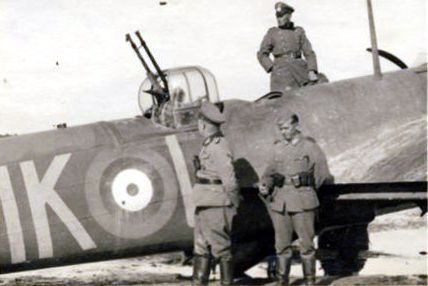 Mrs Leduc, resident in Saint Efflam, was woken one night of September, 1941 by the noise of an aircraft flying very low and which semt to be in distress, it flew low over the villa before landing on the seabed which was still covered with a layer of water, at low tide. Soon she heard calls coming from the bay and Mrs Leduc answered by switching on adn off the light several times. She was committed to do something and left her house to rescue these airmen. Despite she was ignoring their identity ; she rapidly learnt that their aircraft, coded MK-U, had been hit by the flak over Saint-Nazaire, which involved the loss of gasoline in one of their tank.

P/O Francis Reece, Sgt. Henry Smyth and Sgt. James Appleyard, thought they were in England and had decided to try and land. The Germans who were in the closest posts of Flak began to search in the sector. Mrs Leduc suggested to the three airmen to seek refuge in a beach hut. The Germans went on with their dragging, and during two days, supplied in food by Mrs Leduc, the three English airmen staid in their hiding place and attended the removal of their aircraft from the beach, almost undamaged, by teams which came from Morlaix.

Two months later, the three escapees, in charge of an escape organization, remained in Nantes while waiting for their departure towards Spain. But we lose their tracks in Nantes. They three were captured, on November 10th in Nantes, by the Gestapo after six weeks of escape.

Document source : " The longest nights " written by Roger Uguen ; the author tells the crash of this aircraft when retruning from a reconnaissance mission over St Nazaire, close to the villa of Mrs A. Leduc at St Efflam 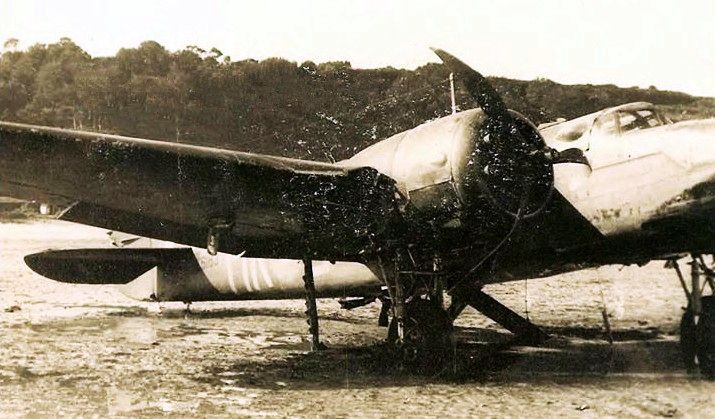 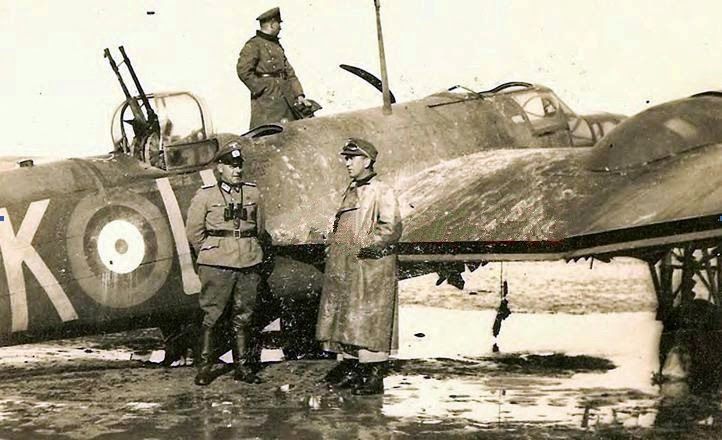 I am a person among many, who had tried to hide you from the Germans when your aircraft had made an emergency landing on the beach of Saint-Efflam (Plestin les Grèves, Côtes-d'Armor) on September 29th, 1941.

Once you and your companions, William Henry Smyth and Francis Reece were hidden, fed and dressed in an old mill at Saint-Efflam by Mrs Leduc, her daughter and some other people, my mother, Madam de Saint-Laurent, with my brother René, who was then 20 years old, were gone in search of you on October 2nd at night to bring you back in our house, the Leslac'h Manor. We kept you there until October 8th, at first in the house, then in the wood, as long as as we had learnt that your presence was suspected by the Germans.

On October 8th Madam Tilly took her car to pick you up and drive to M. Le Gac's farm at Quemperven. From this place, they led you to Mrs Seidel's home in Nantes, where the Germans arrested you.

Mrs Leduc, Mrs Tilly, my mother and all other men and women who had hidden you, were arrested in March and April, 1942. Most of them, among whom Madam Tilly and my mother, died in the German concentration camp.

Yvonne Tilly, Mrs Tilly's daughter (today Mrs Le Corfec) was released after one year in captivity. We wish both to receive as many testimonies and memories as possible on what had happened at that time, but unitl now it was very difficult to find your tracks. We did not even know wether you had survived the war ! I have just obtained your address thanks to the searches made by the local association of Plestin-Les-Grèves, which would like to organize a theme on the history of these locations during this period of the war. We also found photos of the three of you which were taken during your stay with us and which had allowed us to make false ID cards. We then gathered several testimonies, some relevant whereas others are contradictory, what is not surprising at all after so many years.

If you could send us back your memories, including as much details as possible, would be of an invaluable help. We would have also wished to know what you had become after your unfortunate arrest in Nantes. If you forecast a journey in France, the soldiers of Plestin, Mrs Le Corfec, me and my family would be really happy to welcome you. While waiting for your answer, please accept my warmest greetings.

Emergency landing in the sea next to the beach of St Efflam, Côtes-du-Nord (Côtes-d'Armor). Free during six weeks, a contact was taken at the address here above with a French organization thanks to Mrs Le Due.

From St Efflam, we were led towards an old castle and we received assistance from an old lady, her son and her daughter. We were not informed about their names. I remember that it was next to a farm, approximately 17 miles East from Southern Morlaix. Always no names revealed. I remained in the farm of an old couple and my two sergeants remained in a farm nearby owned by a widow.

There we had the visit of a professor who was fluently speaking English. He stayed over a short period and was apparently an important person. Another tall man with the skin matte, visited us to take photos for our passports that another man supplied to us. Our following destination was the station of Guingamp, in a small car. The driver was a woman of about fifty years, rather strong, who had driven us from the castle to the farm. We were welcomed by a man aged 30 to 35 and that we called Mister Georges. He was a medium-sized man. He bought tickets and guided us on our route towards Rennes where we were going to change trains to arrive finally to Nantes. There we were taken in an apartment at a 3rd floor, occupied by a 35-year-old woman, her son aged approximately 7, and her sister of 22/23 years old. There was also another 14-year-old boy and others unknown persons. The husband of the woman was in the Unoccupied Zone.

We were not fluent in the French language even after 6 weeks, and our conversations were limited. In Nantes, we were waiting for our journey to the South to be organized. After approximatively one week, things began to change drastically. A German Commanding officer was murdered in the area (1). We had been able to remain hidden for a while but were finally discovered on November 10th. We ignored how it had occured. We were led to Angers. During ten days, we were isolated in a solitary jail, with only one interview ; during this interview, the woman of the apartment in Nantes entered the room and pronounced only the following sentence " yes, these are the men". We were asked nothing concerning her. We were asked some questions but not much attention was paid to us except to tell us that we were considered as spies (our uniforms were thrown shortly after our landing).

On November 21st, we were transported by bus in Versailles for the prison of Fresnes. There were two buses, the first one was transporting women and I recognized some of them who had helped me. Mrs Le Due waved her hand and did not hide that she knew us, " the three English men of the following bus ". The second bus was transporting men and the only person I recognized was the professor who was fluent in English and who ignored us.

To the prison of Fresnes, we were isolated. We spent 3 and a half months lost to boredom, in the cold and with a few food. Later in February, we were separately sent to Paris to be questioned. We had our own version to answer the questions. They were the following ones: "who were the people who helped you ?, do you recognize this man on the photo ?, did he help you ?" etc. … We remained evasive and claimed that we had forgotten, that we were nore sure.

It worked because a little time after, we were transferred to the camp Dulay Luft. There, we stayed 3 and a half days in prison. I was very sick during this period. I had got the dysentery and the flu. We had arrived at the camp Dulag Luft on the 1st or 2nd March, 1942. We told our story to S/Ldr. Elliot, senior British officer who could only answer us that he would speak about it with the commanding officer of the camp. I then left Dulag Luft for Stalag Luft 3 aroud the 10th April 1941. My two sergeants left a bit later towards camps NCO and then I lost any contact with them.

Once in Stalag Luft 3, I was no longer isolated as an escapee and I worked in a small group on the construction of a tunnel. We were not efficient in the Eastern camp and we changed for the northern camp. Here the work of the escapees was organized with the last leader of the regiment Roger Bushell alias Big X under W/Cdr. Day and Lt.Cmd.Fanshaw i/c dispersal.

I worked since the beginning with this organization at first as "Pilot on duty", then as distributor in pharmacy and finally as tunneller. I missed the opportunity of the random draw for the escape when the tunnel was finally built on March 24th, 1944. Then the work of escape was limited. I was transferred to Tramstadt Ost and finally to Lubeck where we were released on May 2nd, 1945.

(1) October 20th, 1941, the officer in charge of the occupation troops in the Loire-Inferieure (today Loire-Atlantique), the Oberstleutnant Karl Hotz, was shot in Nantes by Resistance fighters. In reprisals, the German occupation authorities, on October 22nd, 1941, shot 48 hostage prisoners at Châteaubriant, Nantes and Paris. Source wikipedia.

Translation of the mails from English to French : Laurence Thomas. January 25th, 2013 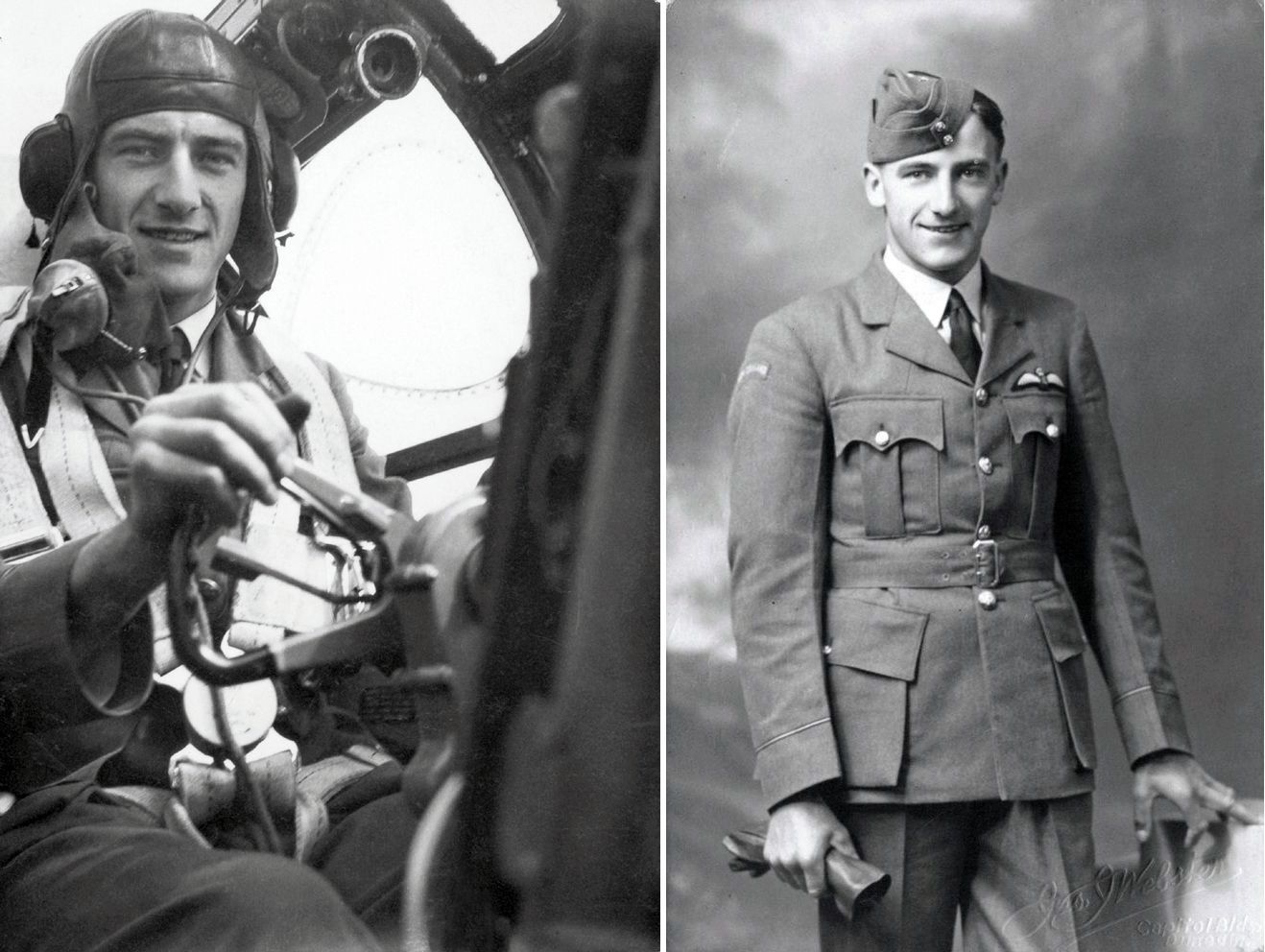 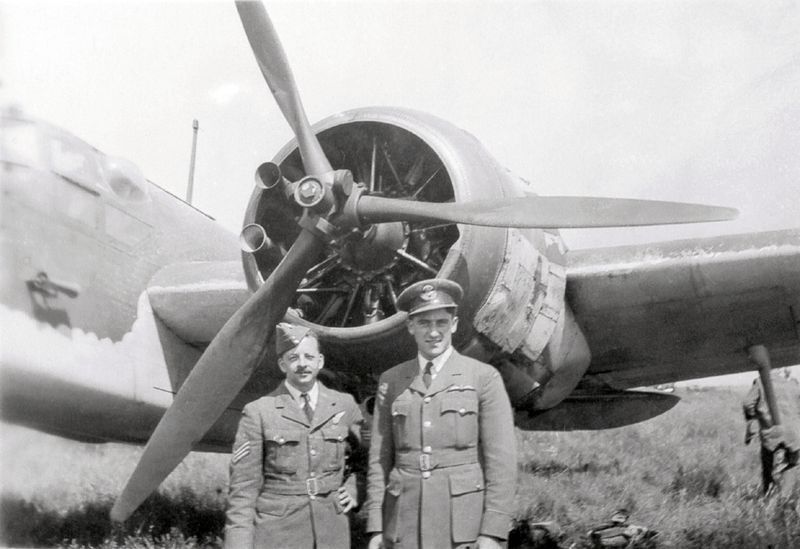 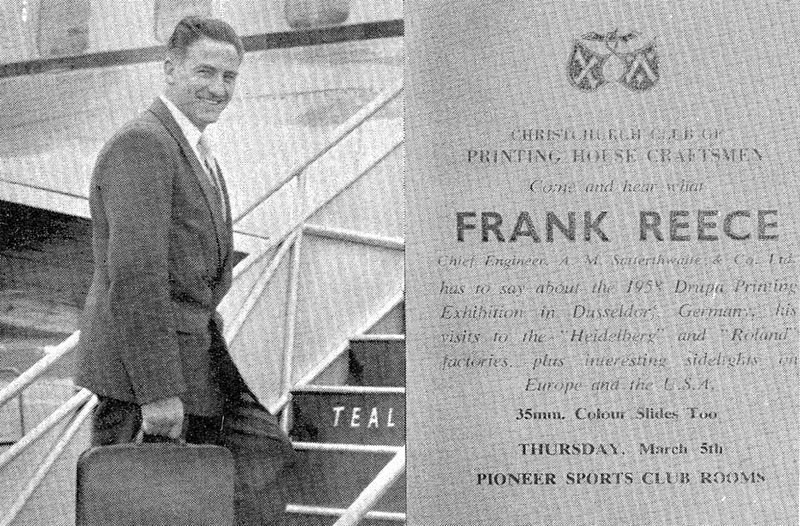 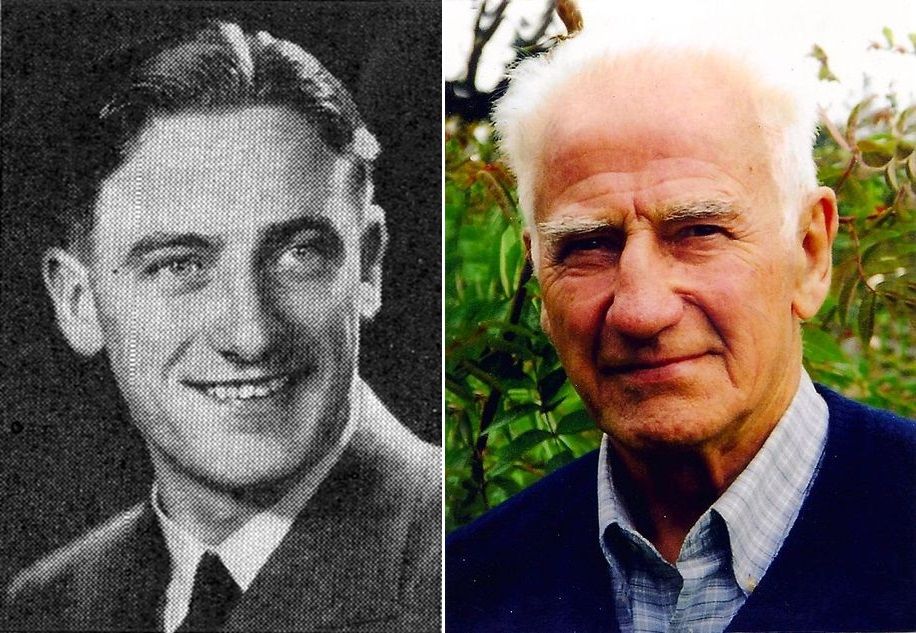 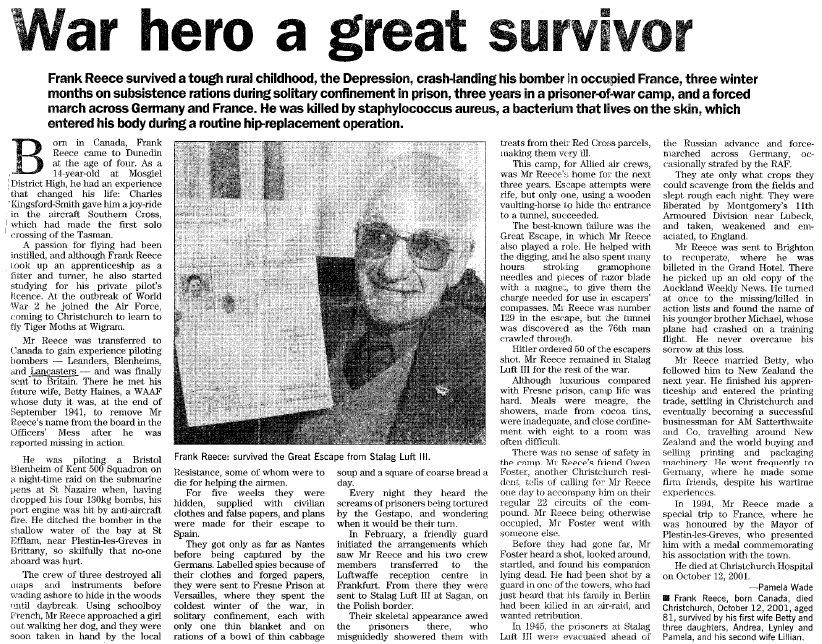 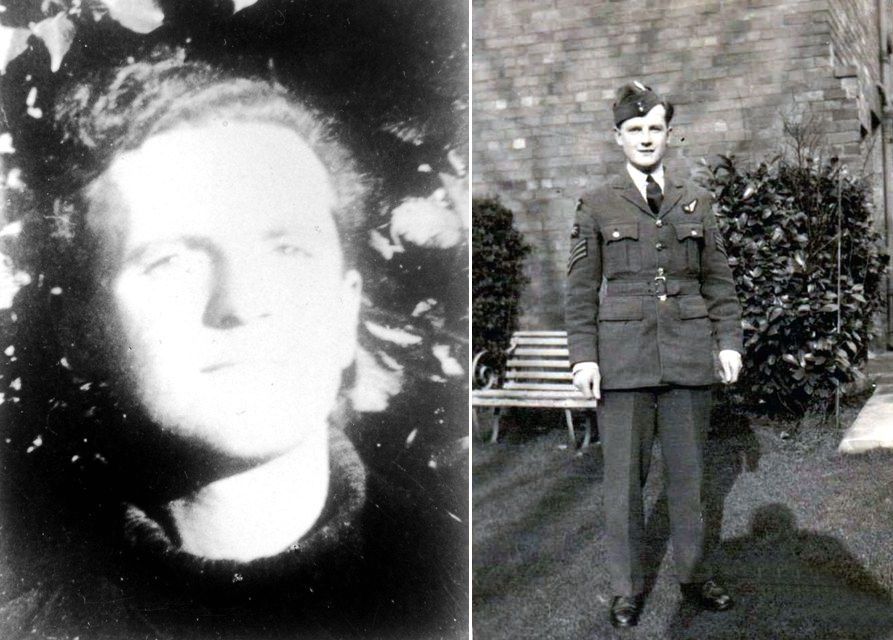 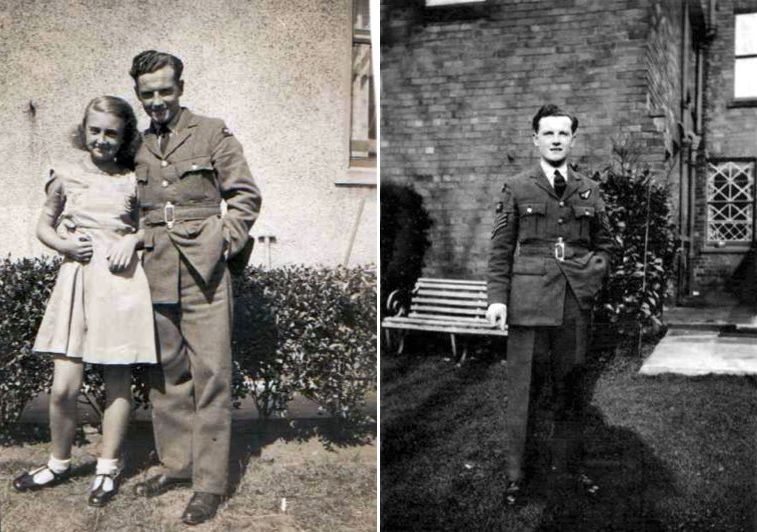 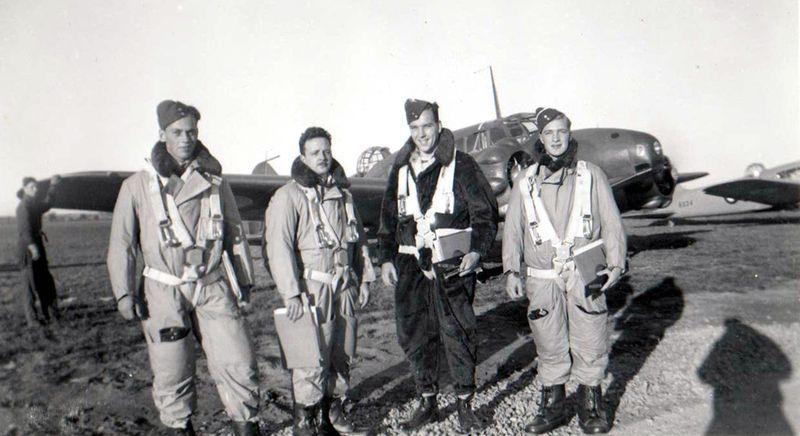 James Douglas, second from the left 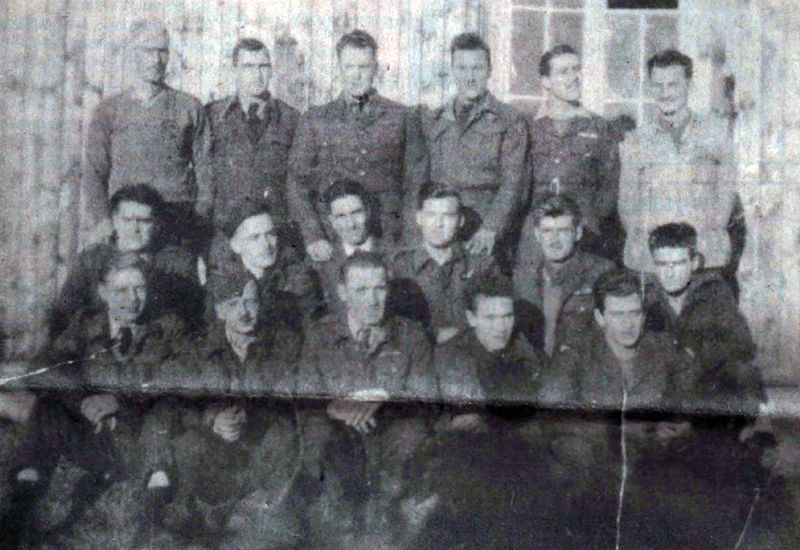 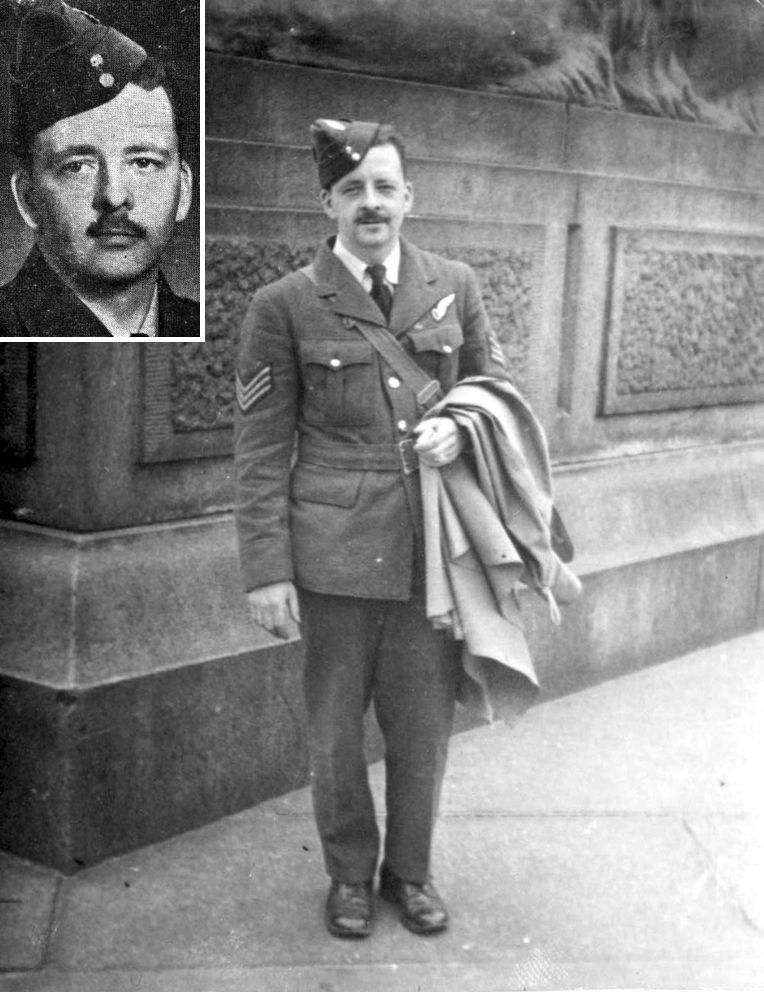 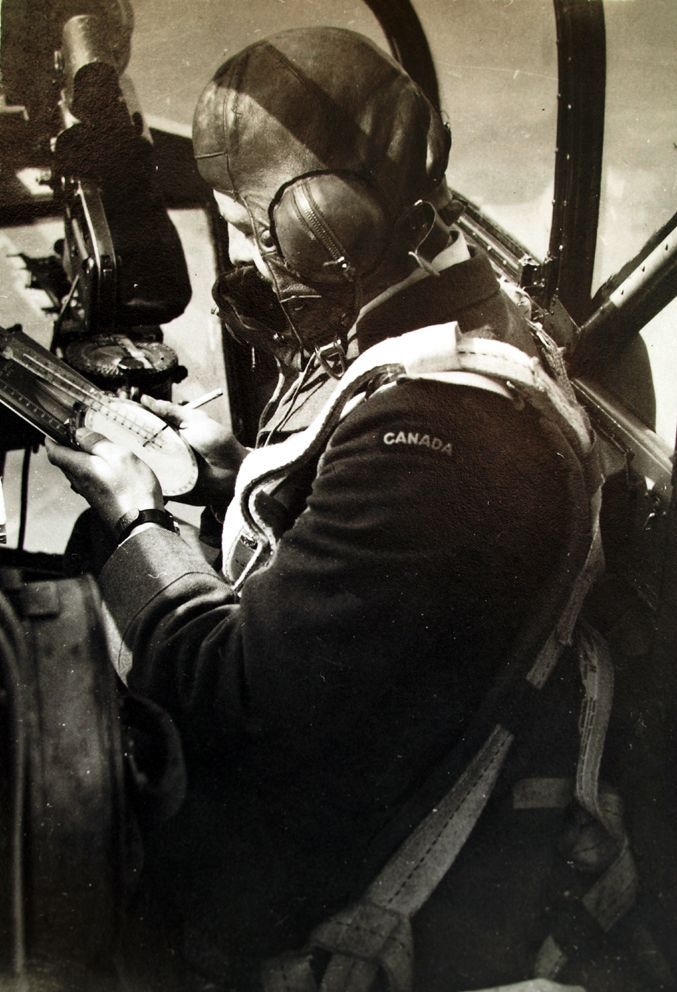