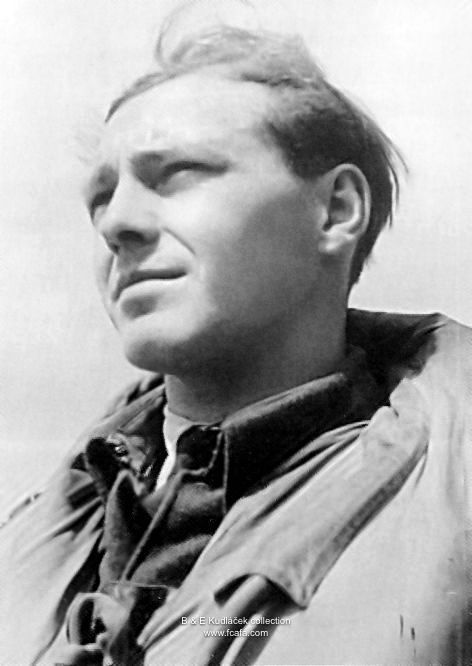 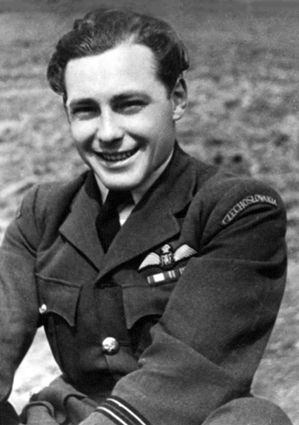 On March 8, 1943, Benignus STEFAN was in charge of the proctection, with ten other Czech airmen, of a group of B-17 on their way to bomb the Rennes marshalling yard (see biography of the Boeing B-17F s/n 41-24514 code BO-R). After joining the bombers, Benignus STEFAN engaged a dog fight with the Unteroffizier Heinz Butteweg (Focke-Wulf 190) of the 8./JG 2 near the island of Bréhat. The German pilot was victorious and the Czech pilot crashed in the 'Pointe de Bilfot' in Plouézec, near Paimpol. Butteweg claimed the victory at 2:12 p.m. 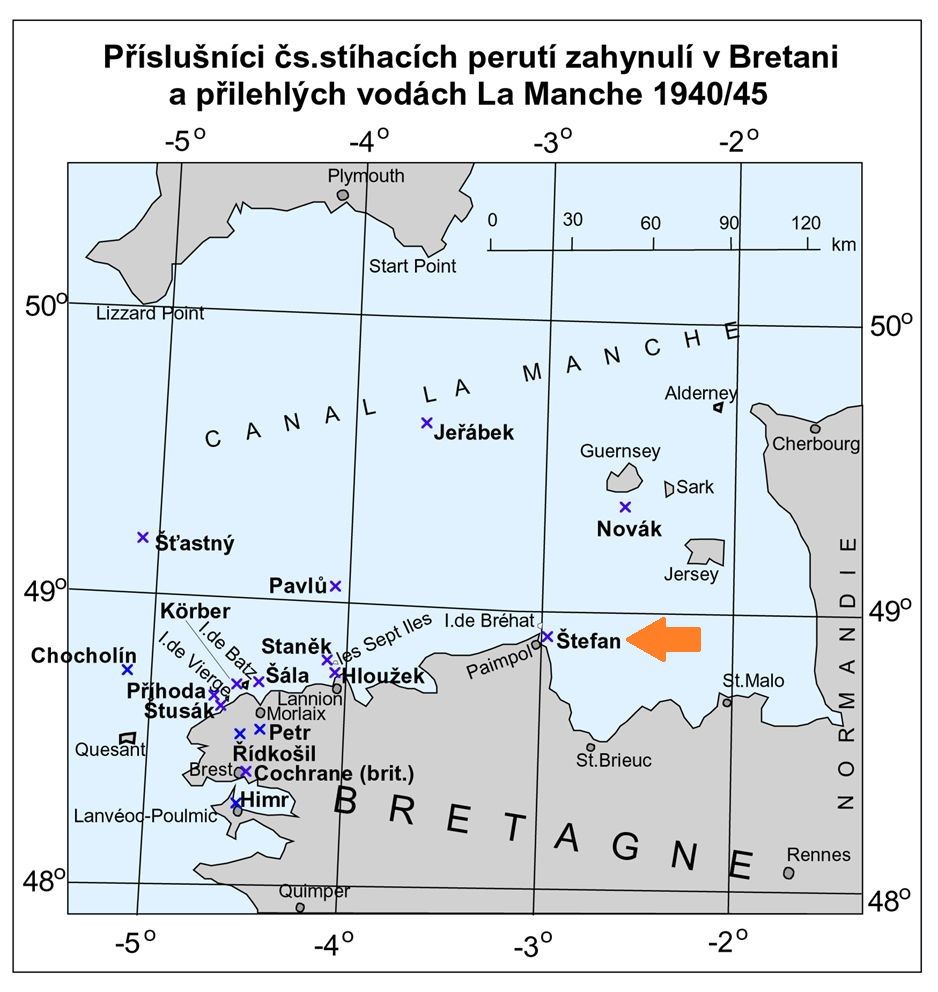 Map indicating the crashes locations in Brittany of the Czech pilots of RAF squadrons 310, 312 and 313.
The arrow indicates where F. Lt. Stefan Benignus has fallen on 8th March, 1943
Document Copyright All Rights Reserved Jiri Trojan 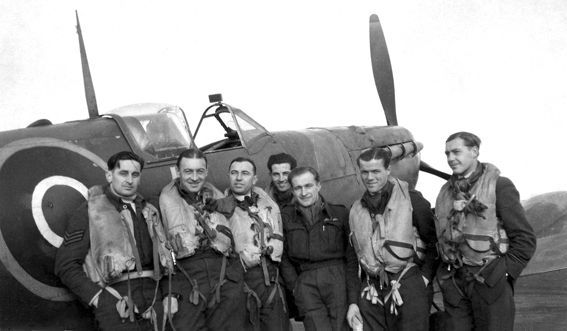 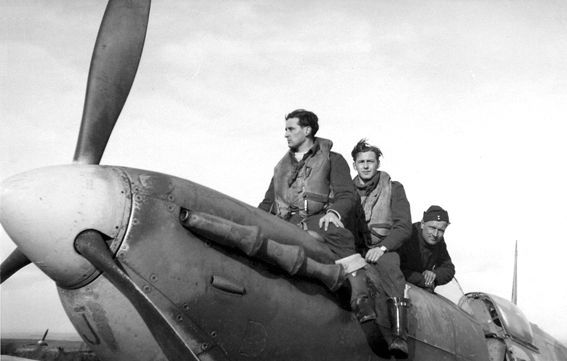 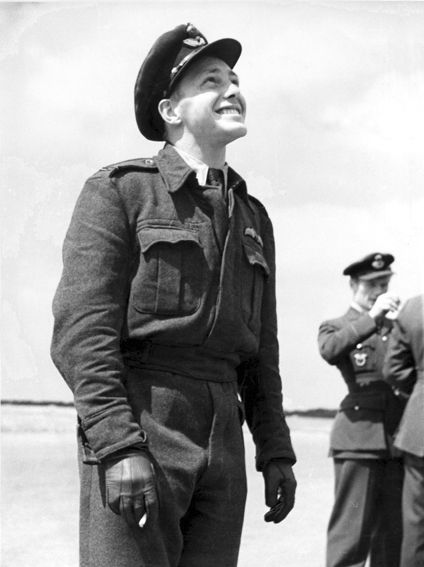 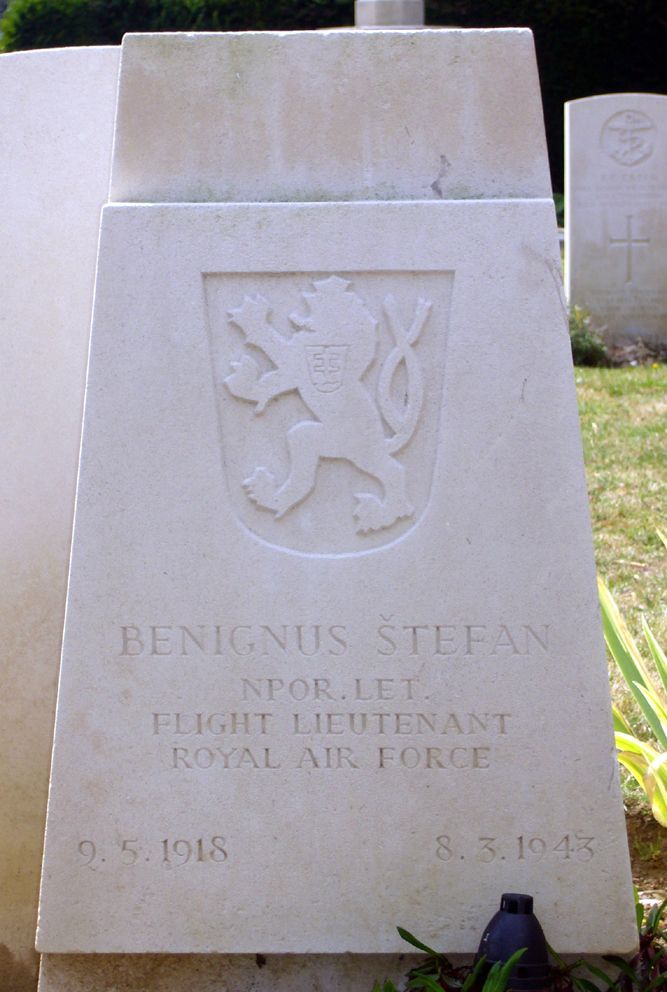 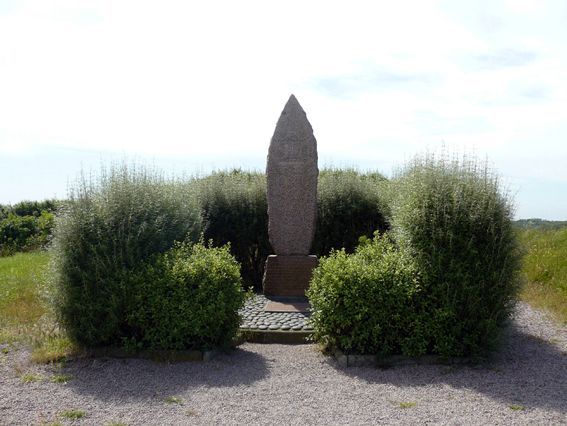 Monument dedicated to the operation "FAHRENHEIT" (November 1942) at Plouézec 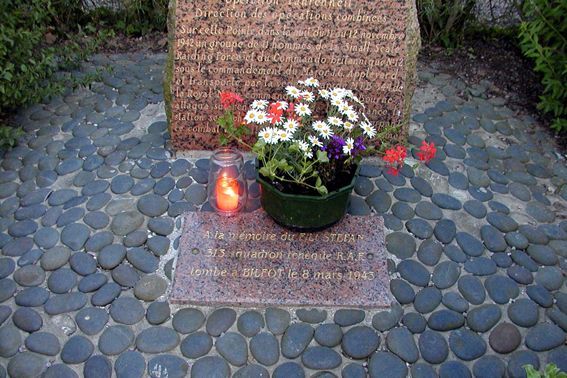 At the foot of the monument to Operation Fahrenheit, a plaque in memory of
Flight Lieutenant Stefan BENIGNUS, inaugurated August 15, 2000

On May 22, 2019, Jean-Michel Martin and Benoît Paquet, on demand of Tom Dolezal of the Free Czechoslovak Air Force Associates (FCAFA), paid tribute to F/Lt Benignus STEFAN at the West Cemetery in St-Brieuc by laying a small tricolour bouquet on his grave. This action has been noticed by the press (see below Ouest-France article). 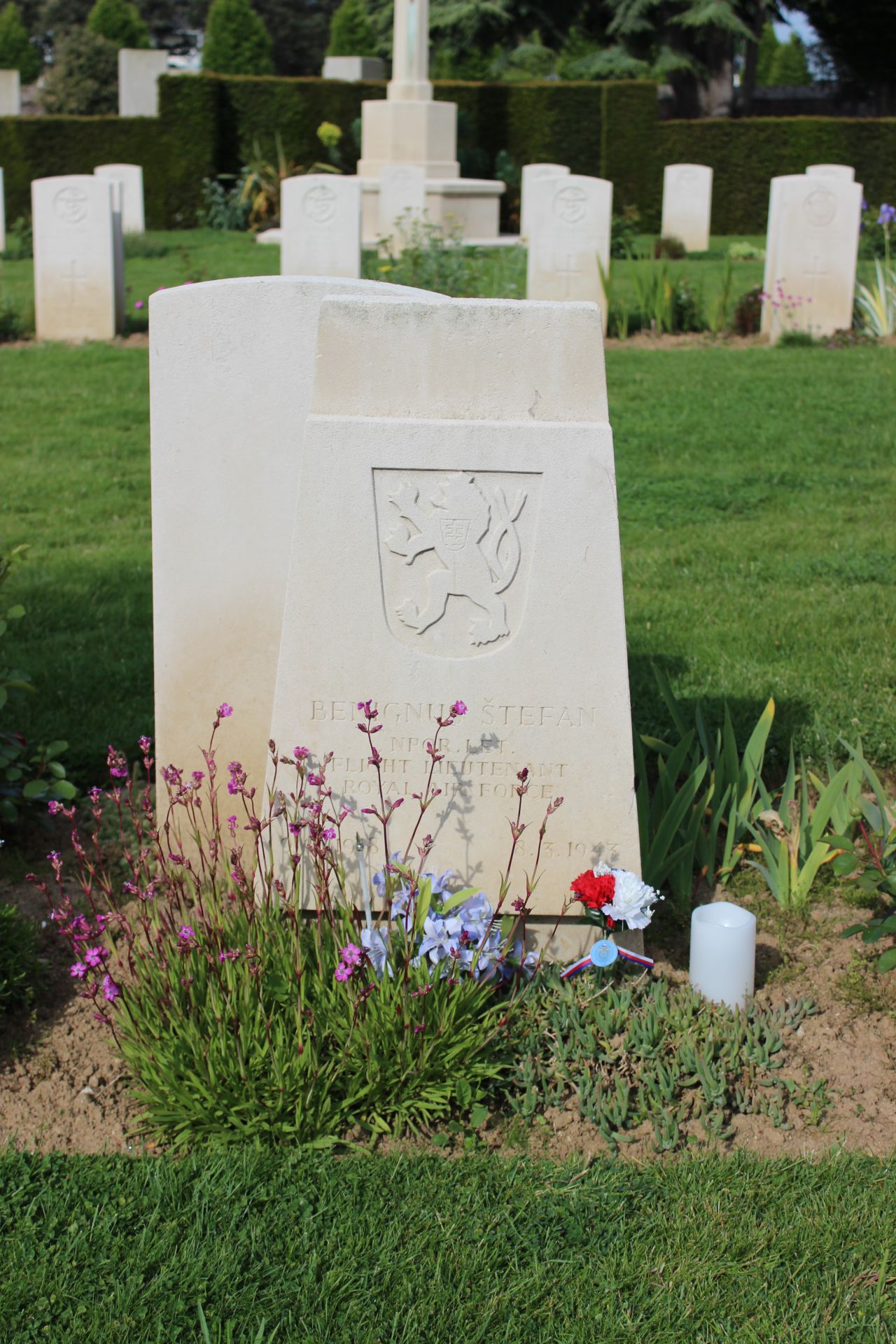 A few days later, on May 27, 2019, Benoît Paquet was visiting Prague and paid some specific attention to the Memorial of the Winged Lion wher he saw the name of F/Lt STEFAN among the 2,507 names of airmen and airwomen who served in the RAF during WWII. 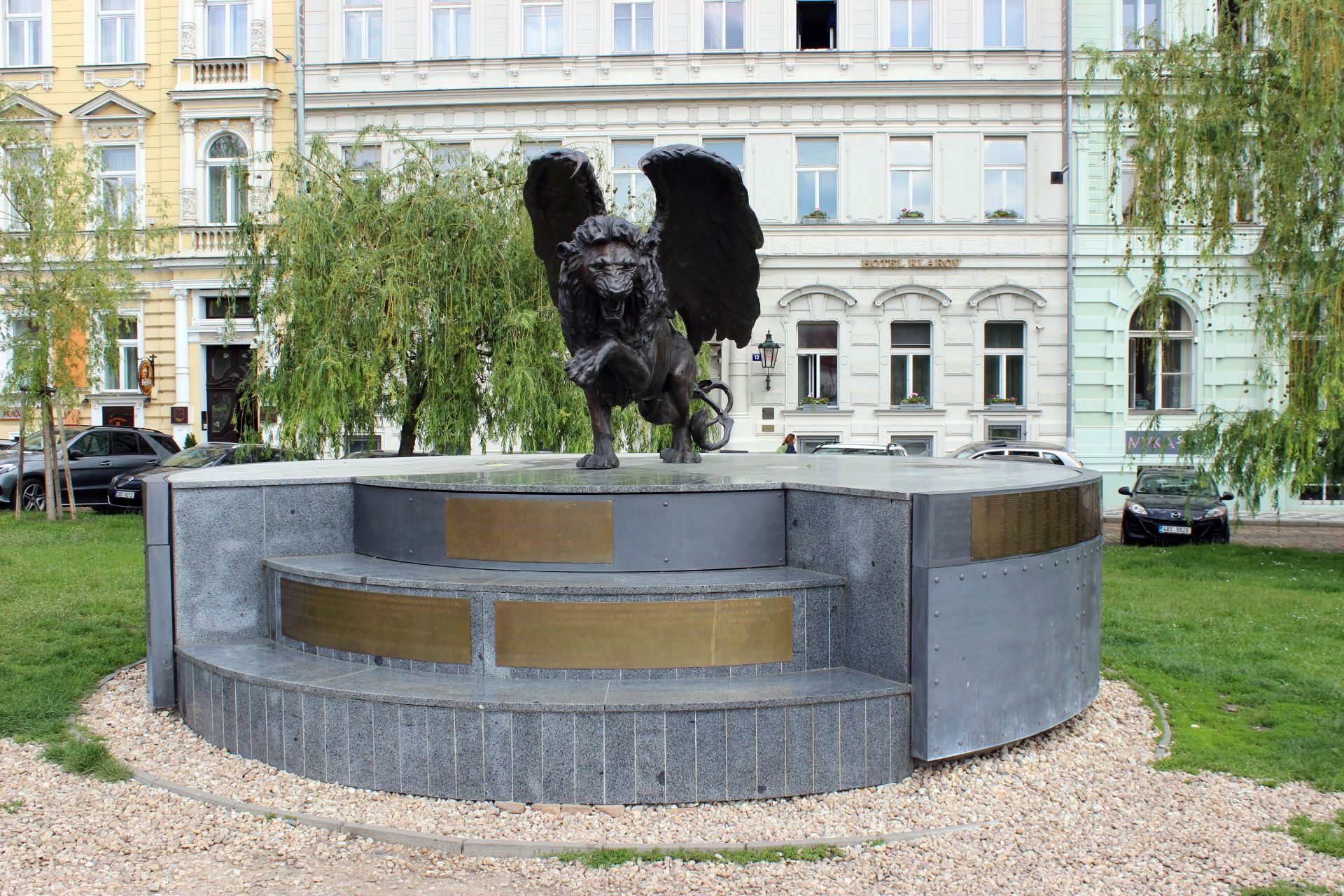 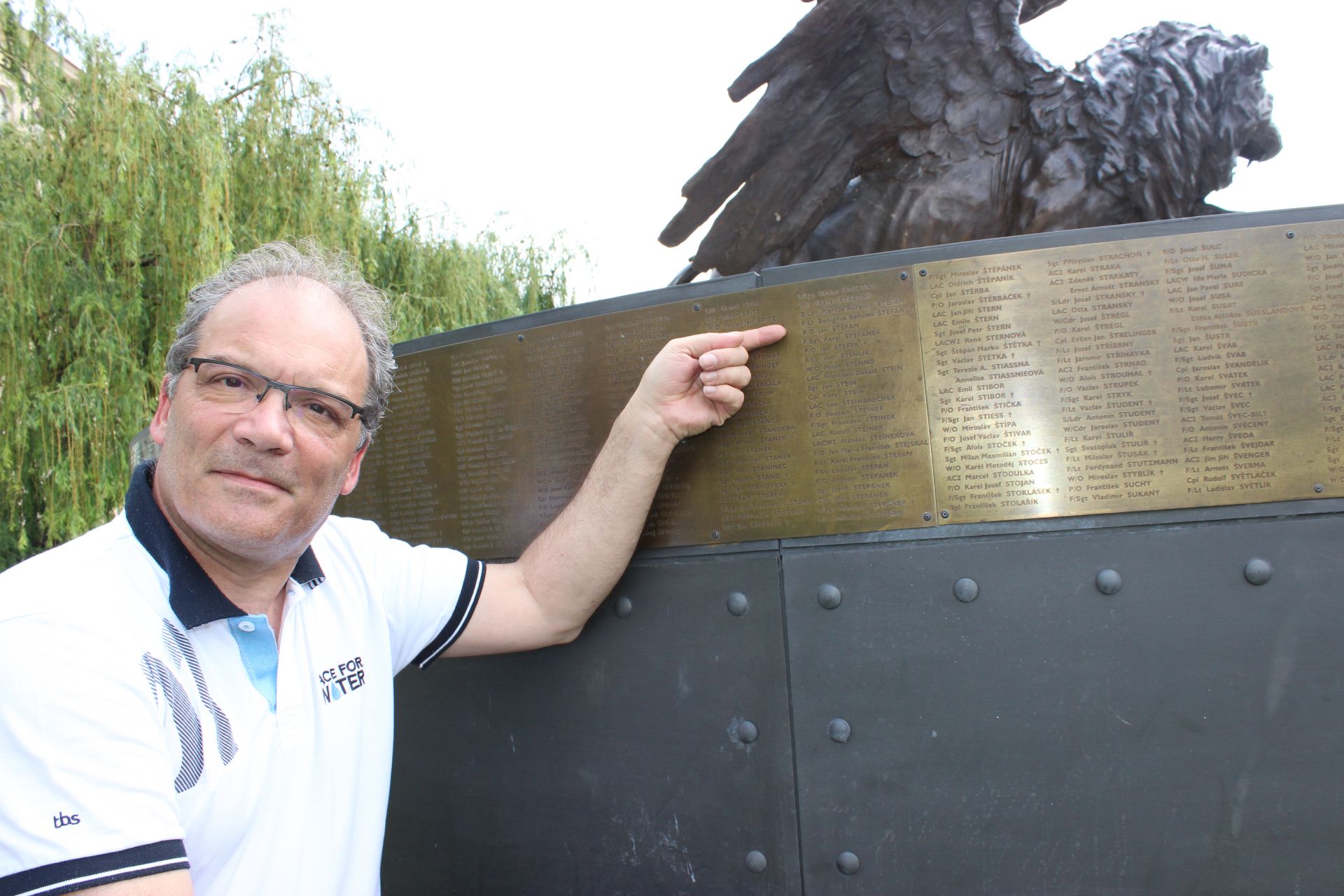 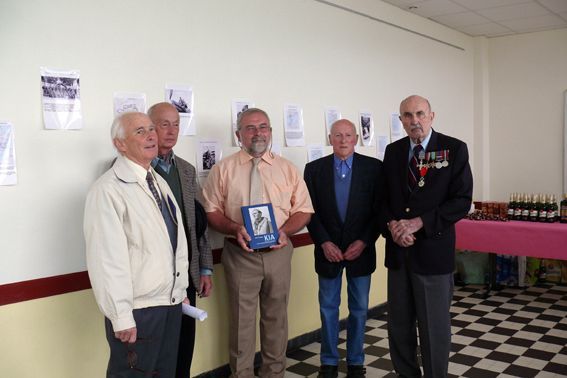 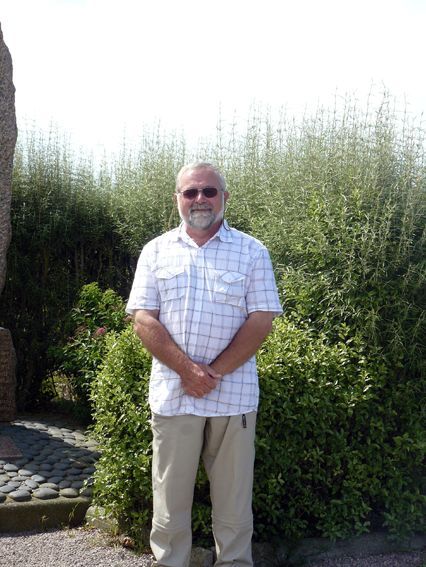 Jiri Trojan at the foot of the monument at Plouézec

Tuesday, June 24, 2008, appointment was made in Plouézec with Jirí Trojan. Jirí Trojan is a Czech citizen, he is the author of the book, "KIA Killed In Action". Jirí Trojan was present in France at Plouézec for the release of his book, June 20, 2008. A huge book of 423 pages. Book dedicated to his compatriot Stefan Benignus, died on mission in Brittany on March 8, 1943. 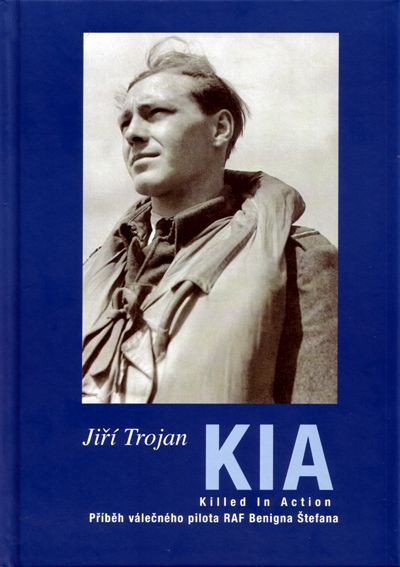 I wish to pay tribute to this remarkable work of author, this book and this work can not be more complete in the researches, as much on this young Flight Lieutenant Stefan BENIGNUS, as on the pilots of 310, 312 and 313 (Czech) Squadron, fallen in Brittany. Too bad this book is written in his native language, in Czech. Apart from the big stories, this book has annotations in English. My contact with Jirí Trojan, dates from 2002, the beginning of his research in Brittany for Stefan Benignus.

The Flight Lieutenant Stefan BENIGNUS was shot down by a pilot of the 12./JG2, then stationed on the airfield of Gaël in Brittany. Some lines trace the death of the Fw. Buteweg Heinz, February 8, 1944 on the grounds of Gael on our website. March 8, 1943, is also the tragedy of the American bombing in Rennes, more than 300 civilians killed (291 victims + 8 coffins with human remains - Source : Municipal Archives of Rennes, W 32 series). And we must not forget that day the loss of the B-17 # 41-24514 in the Côtes d'Armor. 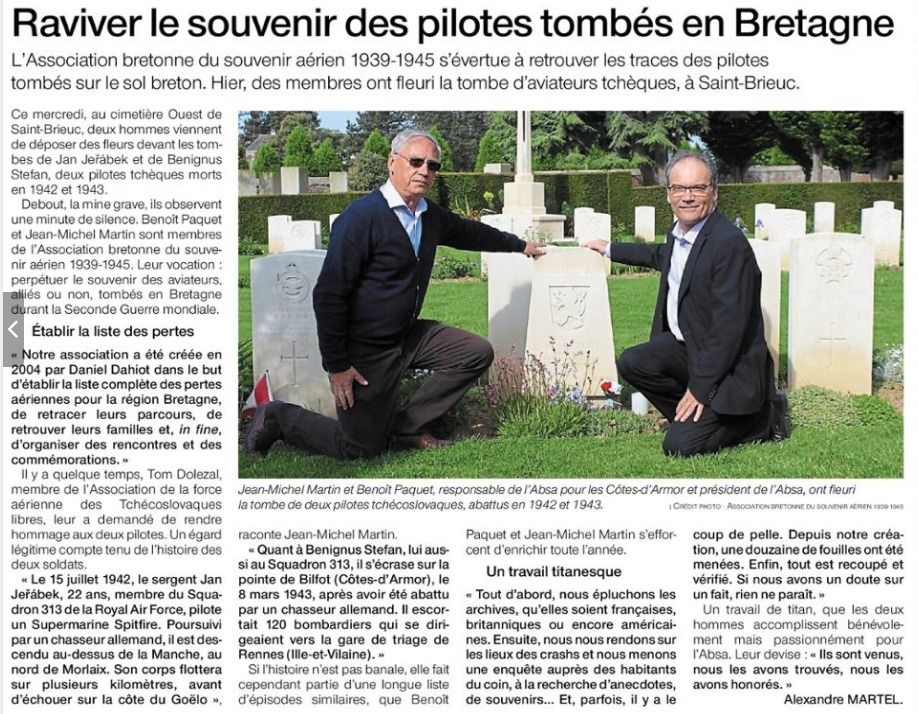 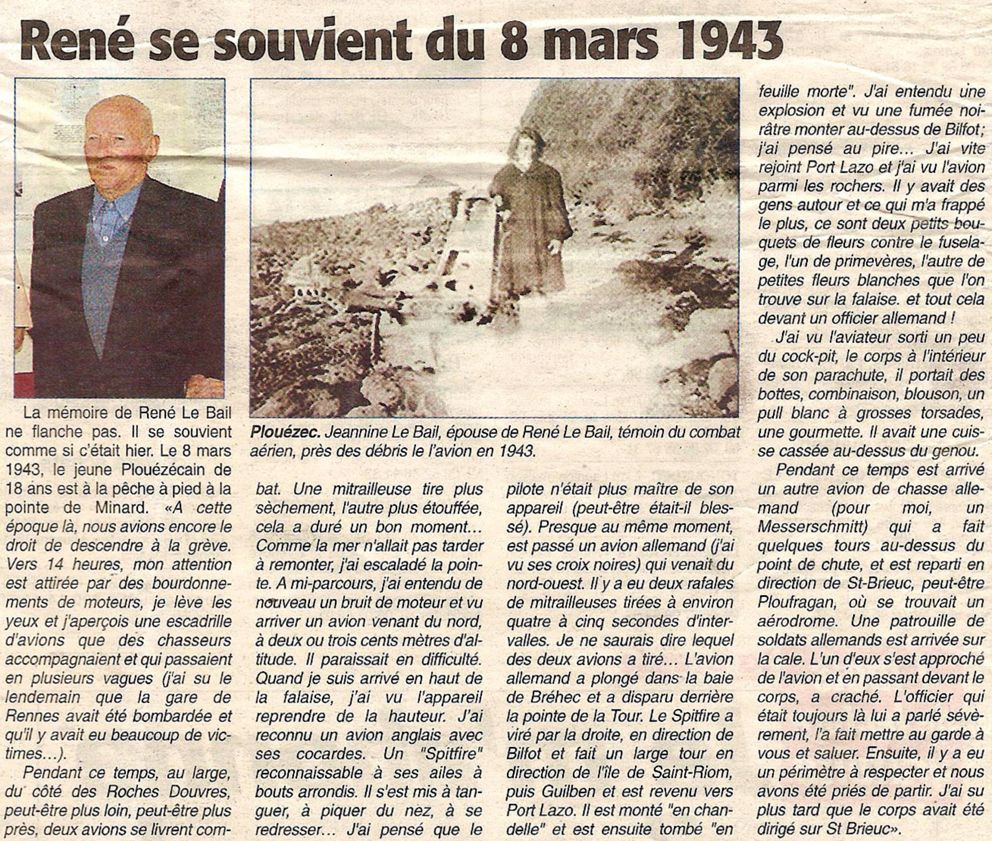