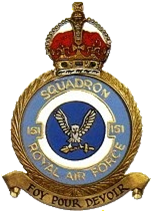 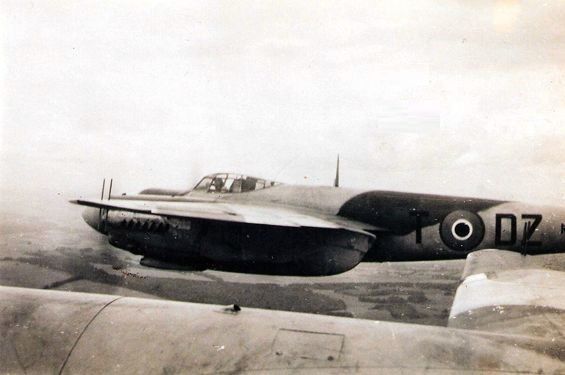 Mosquito of 151 SQN in flight
Photo source and author unknown 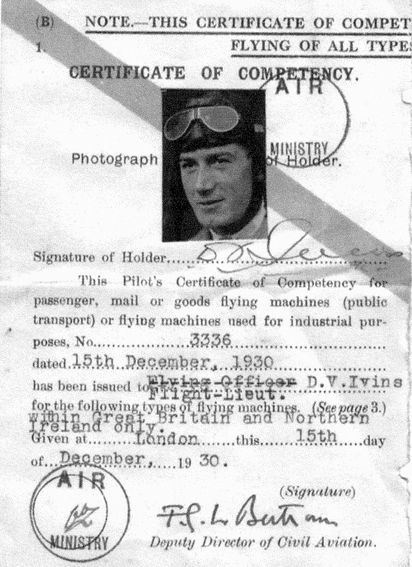 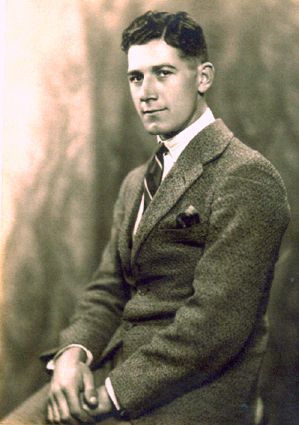 Donald Vernon was born on October 2, 1906 in Newport South Wales. He studied at Cardiff High School. He joined the RAF in 1926. He worked in Heliospolis where he was a pilot on Bristol Fighter. 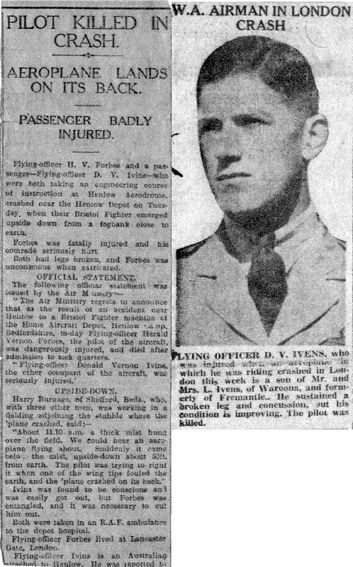 In 1929, the Flying Officer Ivins, passenger on a Bristol Fighter, was a victim of an accident, seriously injured during a landing on the airfield of Henlow in London. The pilot, Flying Officer H. V. Forbes, was killed on board the aircraft.

In February 1931, the Flying Officer Ivins was forced to land near Granville, due to bad weather conditions. As expected, Donald Vernon had a passion for aviation, he bought an old Bristol Fighter with which he participated to aeronautical races Liverpool / Blackpool & Blackpool / Liverpool. 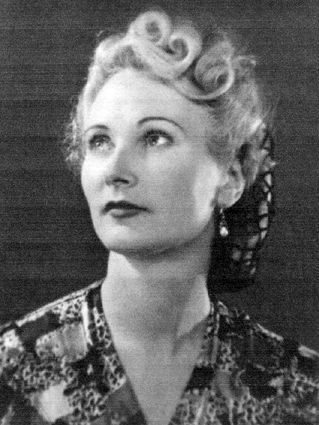 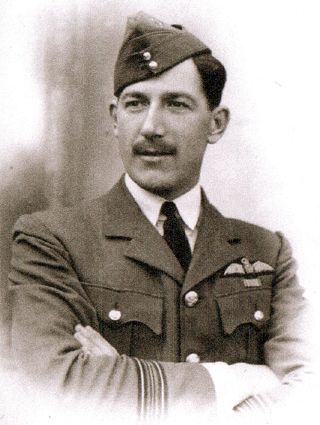 He moved to Blackpool where he married Annie Walst. In 1936 a son was born, David, then in 1938, a daughter, Carolyn. In 1938 he became Squadron Leader. In 1942 he attended a training in the United States to learn the techniques of night fighting. On April 4, 1943 he got the rank of Wing Commander. He was based in Colle, Wiltshire, South West England. 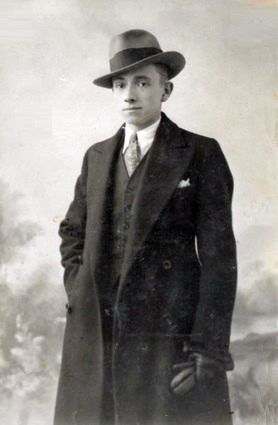 Warrant Officer William Patrick Daly, was born on November 6, 1911, in Poplar, a district of East London. His parents were Patrick and Elizabeth Rose Daly. William Patrick had two sisters, Lily and Ruby. Ruby died in 2006. For many years, William Patrick lived with his family on Tetley Street in Poplar, he studied at his neighborhood school. . 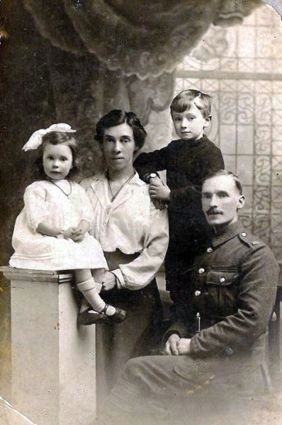 His main interest in his studies was chemistry, studies which allowed him to have his first job, for a short time. He held several jobs as a window dresser in London's tailors' shops, where he remained until 1939. During this time (March 26, 1933) he married Janet Elizabeth (Jean) Grice, a saleswoman. 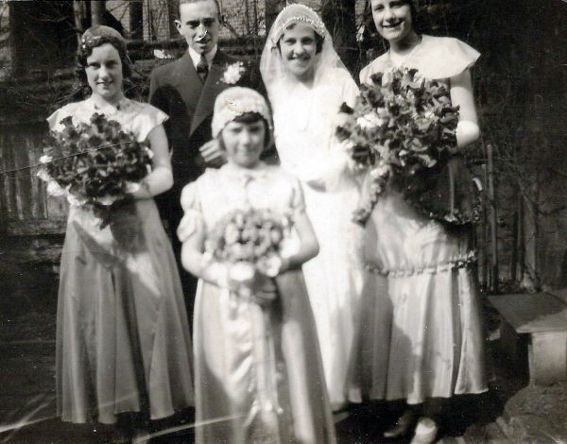 They had two daughters, Pauline and Stella. His sister Lily said that he had always been "a passionate for wheels" ; he had a motorcycle (he had a serious accident and was hospitalized), then he had a car. This passion for vehicles led him to join the RAF, the Volunteer Reserve, and he volunteered for the RAF at the beginning of World War II. He was trained in Scotland as a navigator, then became a member of the 151 Squadron. On May 17, 1943, he and his pilot (Wing Cdr Ivins D.V.) were shot down and killed at the  "Bois de la Haie" in Brittany, during an attack on a German train. They are both buried in the cemetery of Dinard. 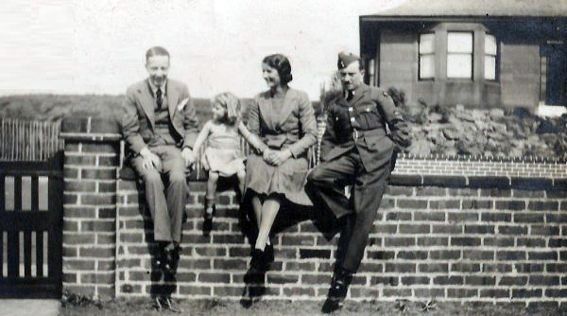 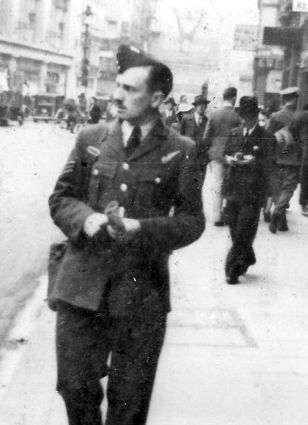 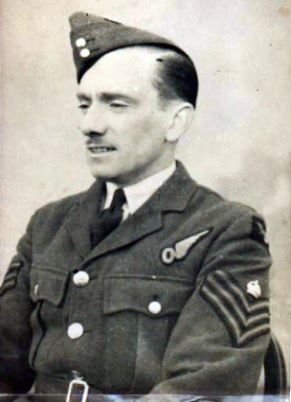 Take off from Colerne base in Wiltshire. (South West of England). The crew of the Mosquito NF Mk.II DZ712, was on Ranger night mission in the Laval area, called "targets of opportunity".

David Ivins :
"Did they die instantly ?"

Raymond P :
"Yes, yes, yes, they were burnt. They did not have time to suffer. The Germans even laid the coffin because there was a stream ; to cross it, they placed the coffin on it. But the Frenchman who was there, who was managing this, told them, "You are going to wash it, clean it right now, because I'm not going to take it away like this". They paid the honors, the Germans. They shot in the air to pay the honors."

David Ivins :
"At what time during the night ?"

Raymond P :
"Around 11 pm, midnight. It was in those hours that the train used to pass. It was already inflamed when it flew over that house, it was already losing altitude. The Germans were there, along the road. And during the day, in order not to be seen, they went behind the trees to hide. And there they connected the phone to find out if aircrafts were announced. I think there were some Germans wounded, because It semt that ambulances arrived and there were some Germans shouting here and there. There must have been wounded or killed soldiers." (However no information in the registers of the cemetery of Dinard or Huisnes-sur-Mer for killed persons). Everything was burnt. And the airmen were burnt too. There had almost no legs left. When they put them in the coffin, they put a product on them. And then, they paid the honors, they shot in the air. They were around twenty, 20, 25 or 30. They had a lot of batteries installed. Once it was here, then it was there, but often it was there. The Germans had told them : "Tonight you will leave your house because tonight something is going to happen"

Jean B, witness of the crash :
"It was around 11:30 am It was not safe around because it was firing, we had Germans everywhere in the fields there. The terrain was not what it is today. They had dug trenches for them as camouflage. It was intense, the animals in the stable were bellowing. They were shooting on the aircraft. It was here to strafe the train. They were often strafing here because it was clear, there was no trees. Fortunately, it did not touch the top of the house. We would have been all killed inside of it. We did'nt dare going out beacause of the aircraft, the shells, the cartridges, everything, incredible how it fired. It semt like shooting everywhere all time long."

Raymond P :
"There must have been wounded Germans too ?"

Jean B :
"Yes, yes, yes, they were troubled. Surely they had "caught". It was not funny. We went to see the aircraft where he had touched all the trees. He had caught five oaks, but at the tops. He had cut down five or six apple trees, uprooted. Everything was grilled all around. They stayed for a fortnight. As long as the aircraft had not been totally removed. We no longer find anything today. In the beginning when we were plowing, we always found something. It was buried in the ground, cartridges or remains of the aircraft. The aircraft was totally shredded. They did not suffer. Those who were there to keep the aircraft were old aged guys. There were three guys to keep, they were old. They came to visit us. They made us understand: "We should not be here anymore". 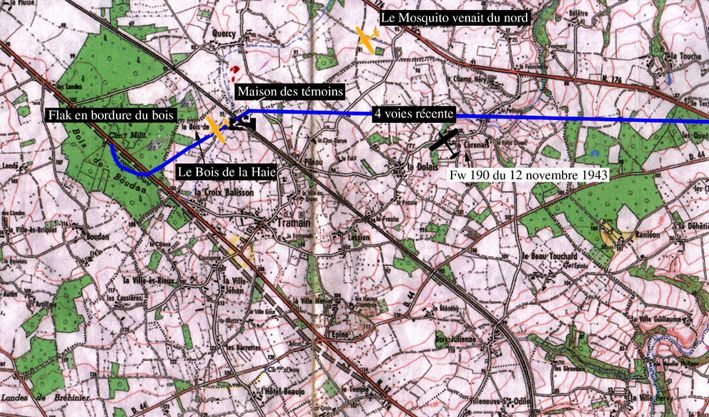 Thank you to Jean Michel Martin for having collected these testimonials and plan at Tramain.

IN MEMORIAM : CEMETERY OF DINARD 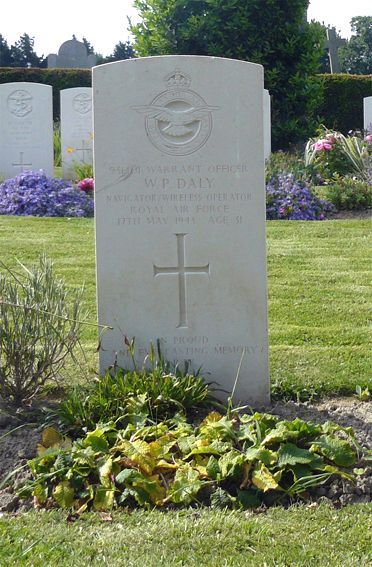