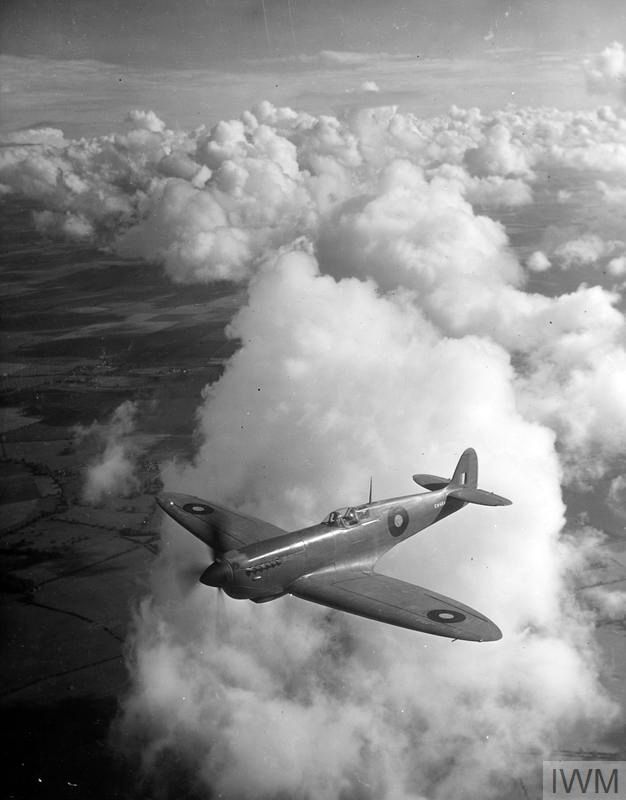 Flown by Flight Sergeant Duxbury Frederick Ronald. Pilot of the Royal Air Force. No 542 Photographic Reconnaissance Squadron based in Benson, Oxfordshire, England. Squadron formed October 19, 1942, for photography missions all over northern Europe to collect photos for the headquarters in order to know better the occupied territory. To identify strategic targets and also to identify troop movements and enemy maritime traffic.

Flight Sergeant Duxbury was born in 1922, he joined the reserve volunteers of the Royal Air Force at age 19. Declared able for flying, he quickly joined the flying school where he was trained for two years. Promoted sergeant in January 1943, he got his pilot's license. He was affected to no. 542 Squadron and was given his first mission on February 8, 1943. On board his Spitfire AA918, he flew at high altitude (pressurized cockpit), over the region of Boulogne, Calais and Dunkirk where his cameras recorded the designated targets. He returned safely to his Benson base.

Five days later, he was back at the briefing. A new mission was given to him. He would have to photograph the German constructions over Cherbourg and Cap de la Hague. On February 16, aboard the Spitfire registered BS497, he had to take photographs of submarine bases under construction in Saint-Nazaire and Lorient.

The missions followed at a rapid pace. Dozens of pilots had to leave every day. On February 18, he was again over Lorient and then flew to Yeu and Noirmoutier islands. He was aboard the Spitfire BS502. Fifth mission on February 24, aboard the Spitfire BP926 with an approach of Saint-Omer and  Boulogne. The 542 Squadron Spitfires were fitted with cameras. They had no armament, which made these missions difficult and dangerous and required an extreme caution. Luftwaffe fighters used to fly the European sky any time, and these defenseless aircrafts could be shot without worrying the enemy, which did not risk anything.

On 27 February, the pace of the missions intensified and Sergeant Duxbury reached on board his Spitfire BP926 the region of Cambrai Niergnies, Ypres, Florennes, Boulogne. Mission that took place without any problem. The sergeant got confidence and by experience felt more powerful but remained lucid regarding the situation of his missions. He took off aboard the BS502, an aircraft that he had already flown on February 18th, on March 2nd heading Cherbourg and Rennes, always for photographs.

On March 4 at 10:15 am, he took off for a mission over Germany. It was the first time. On board his BS501, he flew over Kiel, Flensburg, Lübeck. At 11:15 am, the mission had to be shortened. A thick mist covered the territory he had to photograph. He landed his Spitfire on the base of Benson at 2:50 pm. Exhausting mission after 4 hours 40 of flight. What happened on the next mission on Tuesday, March 6, 1943 ? Flight sergeant Duxbury took off from Benson's base at 2 pm aboard the Spitfire he was flying the day before, the BS501. He left for a photographic reconnaissance over the city of Essen in the Rhur region in Germany. A few hours later, on the base, one was wondering. Flight Sergeant Duxbury had not returned. Hypotheses were numerous among his fellow pilots. No radio messages was sent by him. Had he been hit by an enemy fighter ? What happened to him ? Nobody knew. He did not come back. He had been shot down by the Flak (defense against aircraft) at Plouaret in the "Côtes du Nord" at that time, around 6:25 pm. He crashed at 3 kilometers south of this location. The aircraft touched the ground and catched fire immediately causing the death of the unfortunate pilot who had no had time to escape from his cockpit, probably surprised by this fatal shot. Why such a distance from his flight plan ? It is impossible to answer this question. The distance from Essen to Plouaret is 830 km in straight line. We had in "Côtes d'Armor" a similar case that occurred on March 9, 1945 with a Spitfire of the RAF, flown by the F/O Hyde who fell on Saint-Lormel near Plancoët after a mission in Dortmund in Germany. A total distance of 700 kilometers, also far from his planned flight plan. Sergeant Duxbury was buried as an unknown on March 9, 1943 at the Lannion Cemetery. The Germans had failed to identify him because of the fire which followed the crash. After the war, British authorities resolved the identity of this pilot buried in Lannion. He rests today at the British Cemetery of Bayeux, Calvados. Grave VIII / C / 12.

The Spitfire Mk XI was a reconnaissance aircraft without weapons, powered by an engine Merlin 61, 63 or 70. 471 units were manufactured.

Documents : ORB of 542 Squadron RAF
Thanks to Andrew Fletcher 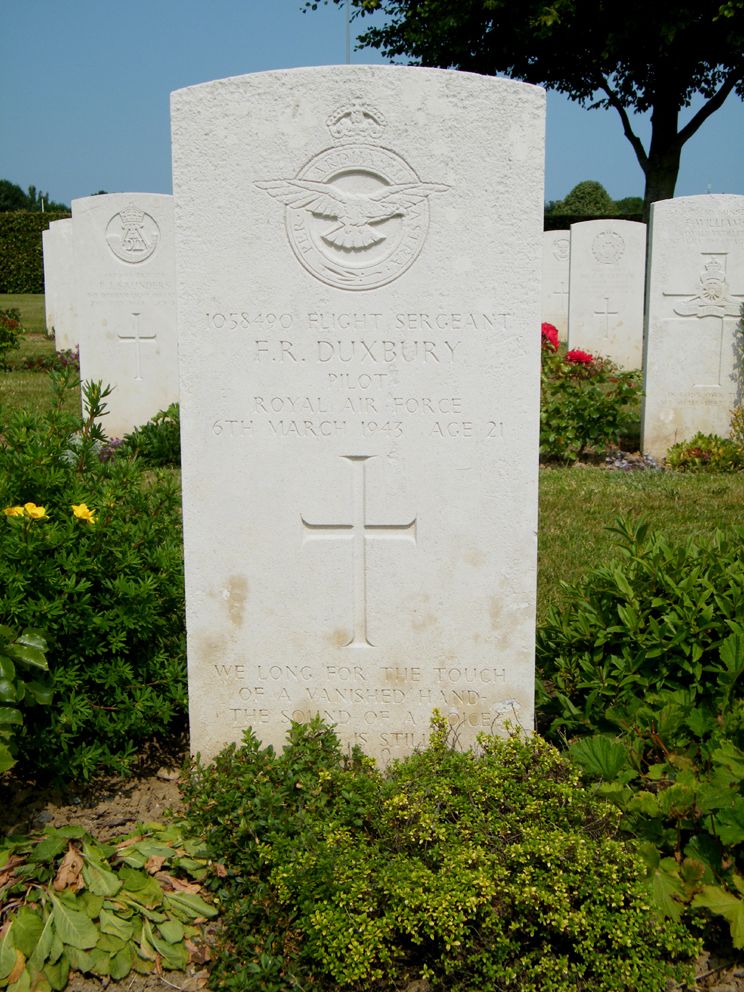